Are We In A Bubble?

Many people are looking at today's housing prices and wondering will they keep on going up, will they hold at this new level or will they come down with either a giant crash or a slow hiss of deflation. I tried to polish my crystal ball the best I could, but it remained cloudy. This is probably because housing prices, like food and energy prices do not exist in a vacuum. There are many factors pulling them in different directions.

There are a few factors that are abundantly clear. Although we have our own opinion, we will present the facts as we see them and stand back so you can draw your own conclusion. 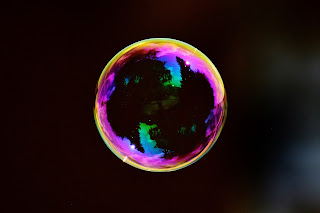 Although housing prices have reached the outrageous stage, there are a few areas where they have begun to retreat. Keep in mind that in spite of general trends, individual real estate markets can be unique. Urban areas can witness a mass exodus while suburbs and country are booming. At other times the reverse is true.

Among the recent trends is one caused by the fact that many people have figured out they don't have to deal with crowded cities and they can work from home – almost anywhere. That is another story, but with a more than tangential impact on our topic.

We see these high real estate prices at a time when some are experiencing job insecurities brought on by economic conditions such as supply chain disruptions and government mandates. Consider the plight of pipeline workers who bought homes based on the better than average income this construction gave them. With a stroke of a pen, those jobs were gone. At this writing, the powers that be are considering shutting down still another pipeline. Then we have medical professionals, who also generally make good money... last year's heroes are this year's zeroes if they don't take a medicine they may have little confidence in. Whether you agree with these actions or not, the impact is real and the money may no longer coming in to make payments on the homes they bought or were thinking about buying.

Beyond that, we are seeing inflation coming upon us at a near record rate. There is less to spend on housing after paying more for food, clothing and gasoline. Whether this actually would keep some from paying the price in the current market or if it just makes people feel less confident and wealthy is really immaterial if it changes their behavior.

So except for the few who have figured out how to prosper in these unusual times it looks like higher and higher prices will be creating economic headwinds. But – remember local markets do not always follow greater trends. Mortgages remain unreasonably low, even as prices for materials used in new construction continue to be a drag on the market, along with shortages of skilled workers.

Recently Zillow announced that they were dropping out of the housing market. Their entry was treated like the eight hundred pound gorilla entering the market because of the vast resources at their disposal. As it happened they bought high (perhaps helping to push prices higher for everyone) and could only sell not so high. I have seen reports that say they lost over eighty thousand dollars on the average house. Most of us would be out very quickly at that rate... and eventually it caught up with them and they are gone. It kind of gives one pause when they base their deals on the Zestimates.

Chicom backed Evergrande recently missed payments on three hundred billion in debt obligations and Oceanwide Holdings has had two of their major developments foreclosed. While these are most commercial projects in California and New York these, and financial troubles of smaller Chinese investors can have negative impact on the financial markets and individual housing markets.

Even with problems in the Chinese housing markets ricocheting around America, there is also the impact higher end markets – usually outside many major cities – as some who have managed to prosper financially in the communist environment are looking to get their money out of the reach of said Chicoms.

Here in the Tampa Bay area construction is booming – as it is in some other areas. The area is already built out pretty well so there are not a great deal of single family homes being built, but there are some. Near me there was a fairly nice house sitting vacant on a large lot. A builder bought the place and knocked it down. Now they are building four homes where one once stood. They may not be as grand as the former structure, but the demand is being met as people come for the milder climate, lower taxes and a less stressful environment. Much of the construction taking place is either condos are apartments. Neither fits the cry for “affordable housing” as the economics simply do not work without hitting the already burdened tax payers.

However word out of the nation's capitol is that they are working to see that those who have been underserved in the past should have an opportunity to buy a home. Here is where good intentions and economic reality collide. This is the same thinking that led to the 2008 housing debacle. The reason these communities were underserved is that, in many cases, the people could not survive the financial colonoscopy the banksters perform before granting a home loan.

The solution back then was the no doc loan. You could just go to a lender and give them a song and dance about your booming financial situation. Since the federal government was scrutinizing the banksters, you could get a loan with a credit score in the 400s and a body temperature somewhere around 98 degrees.

The results were predictable. Many people moved in to their new homes and some never even made the first payment. The government stepped in and attempted to keep the market from going south too rapidly, but it was not particularly effective in preventing masses of foreclosures that eventually came on the market and down came the prices. This is something that may be in our future depending on how the people in DC want to serve the underserved.

We are already facing a wave of foreclosures in the making, brought about by rent and payment moratoriums that have expired. Again there will be efforts to slow their entry into the market, but is it possible they will be more successful than in the past?

Trends Are Made Up Of Individual Stories

Buying at what may be the top of the market is best if you can be there for a while. During the last crash, I got a call from a couple that bought a house with no money down. I don't recall if it was one of those deals with negative amortization during the first few years, but they owed $200,000. They were getting a divorce and neither one could afford the place themselves. They had consulted a realtor who told them the house was currently worth 190,000. No room for commission and no listing! They could not come to the closing table with enough money to either pay off the shortfall in the sale price or the realtors commission. With what I have learned over the years, I might have been able to do something for them – not get them much cash, but avoid the foreclosure. As it was, I wished them well and suggested they reconsider the divorce.

Are we headed down the same path? My crystal ball is still quite cloudy so I picked up one of the novelty Eight Balls. I shook it up and flipped it over. It told me: The future is uncertain.

Posted by Choice Properties at 6:35 PM No comments:

Posted by Choice Properties at 6:22 PM

Email ThisBlogThis!Share to TwitterShare to FacebookShare to Pinterest
Labels: how to sell my house, sell my house
Newer Posts Older Posts Home
Subscribe to: Posts (Atom)