Does a Bad Inspection Report Kill a Deal?

This is a question that concerns both home buyers and sellers. There is no firm answer, other than that it may require some creativity and flexibility from both parties. The severity of the problem, at times, is a matter of perception and the degree of desire to complete the sale. 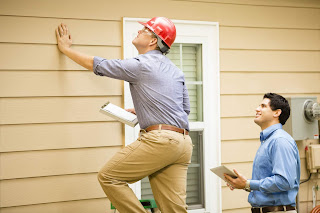 Each buyer brings with him or her there own experiences and background. So what is a deal killer for one may not even raise an eyebrow for another. For instance, I recently sold an older home where the inspector, without comment, noted that there were galvanized pipes running out to the street. The buyer had just spent several thousand dollars replacing the galvanized pipes in the home they had just sold. For them, this was too much for them to handle so they backed out of the deal.

I got some estimates for the replacement, however, I did not intend to do the job unless it became necessary to complete the sale. However, the numbers would have been useful if it came down to a negotiating point. Even this proved to be unnecessary as just a few days later we found a buyer that didn't care one way or another and was content with the pipes as they were.

Often times inspectors will come up will all sorts of minor points that don't make a whole lot of difference one way or another. That is what they are trained to do. Although, it seems that some take kind of perverse delight in finding the “how did you ever see that” type of detail.

I was buying a house a few years back and the report came back with about 12 to 14 items that needed attention. Among them were cracked outlet covers and a loose fence post. I already was aware of most of the things and it was a little annoying, but the guy was just doing a thorough job. The one thing I asked the seller to fix was a mis-sized circuit breaker. I hadn't noticed that and it was fixed without me having to do it.

Often the inspector will have a list of things you can ask the seller to take care of. If they are not major, they usually agree to most of them and it saves you a little work.

What if it Isn't Little Stuff?

Sometimes the inspection will turn up issues that many home buyers will not pick up on. This is why you hire these guys. Sometimes they can keep you out of a money pit. Suppose he finds that the HVAC is held together with chewing gum and baling wire, or the roof isn't as good as it looks and will need replacing in a year or two? Are these deal killers?

It all depends on how badly you want to buy the house, how badly the seller wants to sell the house, and how good a negotiator you or your agent is. Let's say the major repair costs around $15,000 and you really don't have the extra money to handle it. There are various options – assuming the seller is flexible and willing to talk about a solution. If he is not, it's often best to walk away and keep looking.

You could ask them to drop the price by that amount or at least a portion of it. That sounds good but probably won't help as it won't lower your down payment that much and you still won't have the money. If it is a cash deal, that can be a workable alternative, You could ask the seller to replace the roof before the sale is complete. This takes the problem out of your hands – sort of. This way you have no control over the process and you may get a good job or you may get a cheap job. You could offer to pay the full price that you agreed to with the amount for the repair held in escrow to pay for the job, That is the title company or the attorney that handles the closing will keep the money in their account until the buyer is satisfied the job is complete – then pay the bill.

These are three ways of working and there can be combinations depending on what works for each of the parties. The point is that a big bill does not necessarily kill the the deal, but it probably does require some sort of give and take to make the deal work... if you still want to,

If it is a Deal Killer

What do you do if the problem is more than you want to deal with? Any reputable agent will include an inspection contingency clause in your agreement. In my part of Florida it is usually ten days from the time the seller accepts the contract, but even that is negotiable. This gives you that much time to have the inspector evaluate the property and it is usually a no questions asked satisfaction contingency. This should be scheduled as soon as possible to give you the maximum amount of time to make your decision.

When working with investors, usually on fixer-uppers, some will want to have larger deposits and no contingencies. I understand they don't want to tie up the property and have someone back out, but personally, I tend not to deal with them.

I had one deal where we gave the place a once over and made an offer. After it was accepted but before the inspection appointment, I was giving it a much closer look since actual money was involved. The house was a brick bi-level on a lot that sloped to the back. As I was examining it closely I found a crack in the foundation at one of the back corners. As I followed it up, it ran halfway up the house – through the bricks, not just the joints. It could have been fixed, but I really didn't want to deal with it.

I talked to the agent and canceled the contract as that is the purpose of the inspection contingency – no matter who finds the problem.

While it is not usually done, I have come to be of the opinion that the seller could benefit from an inspection when putting it on the market. This way you have a pretty good idea what the buyer will find, It is possible then, to fix many of the smaller issues and be prepared for the major ones if any. If it is a good report, you can show it to potential buyers. If it is not good, you can mitigate the problems so as not to scare your buyers away.
Posted by Choice Properties at 11:23 AM