Is a Short Sale Right for You?

This week I looked at a house that was being marketed as a short sale. I'm not sure why but I do this occasionally. It's probably for the same reason I take a hammer and smack my thumb from time to time just to remember why I shouldn't do it. For those familiar with the stock market usage of the term, it's not the same thing. Unlike stocks, people do not sell borrowed real estate in the hope that they can buy it for a lower price at a later date. I guess if anyone has tried it, they would be sitting in a cell next to Bernie Madoff. You remember him, he's the guy who made off with the retirement funds of a lot of unhappy people. 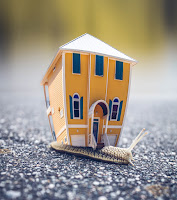 In real estate, a short sale occurs when the banksters holding the note on the property agree to take less than the amount owed, generally because payments have either stopped or are not coming in at regular intervals. They agree to accept a selling price that is short of the amount the buyer contracted to pay.

I have been to auctions where we were told the bank would accept pretty much whatever price brought the hammer down and the cry of “Sold!” from the auctioneer. When the property is a pretty house in need of little repair and a number of people are looking for a nice place to live, chances of finding the sought after bargain are about the same as finding a Super Bowl half time show suitable for the children to watch. Even on less than perfect houses, far less than perfect, I have been to auctions where investors quickly dropped out and watched in amazement as a couple of owner occupant bargain hunters bid the price up beyond even the most optimistic after repaired value (ARV).

Banksters love that kind of stuff, but it is expensive and time consuming to go through the foreclosure process so they often turn to the short sale. They want to get the non-performing loan off their books to keep the bank examiners semi-content, but rarely are they in such a hurry as to give an investor a fair shot at a reasonable profit. In fairness to the banksters, rarely does the guy consigned to the basement of the home office even see the property, so the price they accept is more related to minimizing their losses rather than based on the actual value of the property. They get input from realtors, but, in the end, they think know the market better from hundreds or even thousands of miles away.

Getting back to the short sale I looked at last week: the bank approved price was $129K and the Zestimate was $176K. Now I won't go into the reliability of such numbers but comps in the same neighborhood showed the house could have been worth somewhere in the mid 180s. So with a $50K plus spread it was something to check out. One of the sad facts of life is that when homeowners find themselves in this position, mainenance falls by the wayside along with the mortgage payments.

So when we walked in the front door, I saw the popcorn on the ceiling was separating because the air handler above leaked water from the tray beneath it... but that was no longer a problem because the AC was no longer working. There were wires strung around the rooms, sometimes from the ceiling, as apparently some of the outlets were no longer functioning because rats in the attic had been having a merry time chewing on most anything exposed. It was listed as three bedroom home because the fourth was an unpermitted carport conversion. With one bath, four bedrooms was a bit excessive to put on the market so turning it into a garage would have been on the agenda for a flip.

The kitchen and bath were not bad for a house built in the mid fifties and might suffice for an economy rental, but they both would have to go to come anywhere near the mid 180s. Laminate floors were relatively new in the living and dining area, but the rest was vinyl tiles on a concrete slab.

Outside it was apparent the roof was on its last few tropical storms and siding on the back of the house was pieced together in a unique fashion. Most likely the best thing to do would be to replace it with vinyl siding that was common in the neighborhood. There were several other “features” that brought the repair estimate to something just shy of $50K.

This, according to the guru taught formula of 70% of ARV minus repair costs yielded a maximum allowable offer (MAO) of $82K... pretty close to my off the cuff comment of about $80K.

Since the place had only been listed for about two weeks and the banksters were still in their fantasy price period, I just decided to tuck this information away and check back in a month and a half to two months... maybe longer.

If someone wanted this place as a home of their own and wanted to act as their own general contractor, hiring all the tradesmen themselves, they would probably come out with a decent house the way they want it...along with a few well earned gray hairs.

When I lived up in New Jersey (something I don't admit to very often) there was a saying “nobody's gonna good deal ya”. This is especially true with banksters, but it doesn't hurt to check them out from time to time. You may just find one to make a buck or two.
Posted by Choice Properties at 2:46 PM