I sold a mobile home to a nice lady in a nice park. For a while everything was... nice. However after a while she began hearing squirrels scampering above her living room and driving her little dog crazy. She failed to see the humor in my observation that instead of a drive it was more like a short put.

Wanting to help return piece of mind to her place of abode we discussed various options. I called a local exterminator that I had worked with in the past. He looked the place over and recommended sealing off all the openings along the edge of the roof for a mere several thousand dollars. 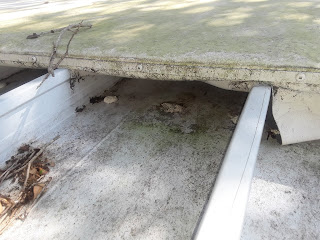 This was not in her budget and I was not about to write the check. We kicked around some ideas – remembering the exterminator's recommendation that the barriers installed be metal as the squirrels have sharp teeth and will chew through pretty much everything else.

I looked at different ways of getting the job done. My first thought getting some pieces made up at a local aluminum shop. But that would be more money than I thought would be appropriate considering the lady's financial situation. I considered getting pre-made flashing at the building supply house and cutting it to size.

While browsing through my local blue store I came across some pieces of step flashing. Individually they were not large enough to fill the space, but when pieced together would fill the void nicely and have enough flexibility accommodate the variations in size. Ah but how to fasten them – some more investigation brought me to self piercing roofing screws. And they worked beautifully to fasten the flashing to the aluminum pans that made up the lower roof.

However they could not penetrate the metal strip along the edge of the roof. A titanium drill bit did the job of providing a pilot hole for my roofing screws. And this is what we got... not particularly beautiful, but effective. I challenge any squirrel to gnaw his way though that! 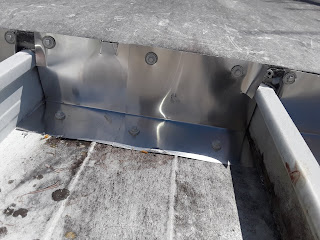 There may be 27 other ways to do the job, and we probably considered half of them. Once we had the process figured out, all it took was filling one hole, then the next a hundred plus times.

So what did it take? Stacks of flashing, boxes of screws, a drill with titanium bit for pilot holes and one for the screws and a tin ships to fit pieces into place.

The operation is farely simple and repetitive. But it works. 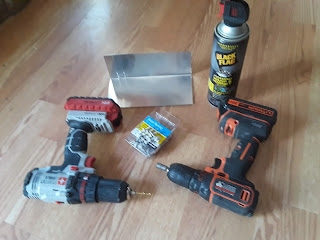 Oh yes, and one more essential item... Wasp spray. Not for the WASPs that give SJWs agita, but the kind that fly around and sting when you start messing with their home. Squirrels aren't the only critters that become squatters in available spaces.
Posted by Choice Properties at 6:53 PM