Ever Consider Mobile or Manufactured Homes?

Here in Florida mobile / manufactured homes have risen far above the image the cynical James Carville referenced with his comment about dragging a hundered dollar bill through a trailer park. Trailer parks as the political adviser pictured them may still exist somewhere but they are few and far between in Pinellas County. On the contrary, many are active communities where there is much more of a sense of neighborhood than in high dollar gated fortresses. There are quite a few different types of parks designed to meet various needs and demographics. The first and most obvious breakdown is the difference between 55+ and family parks. The 55+ parks are popular with retired folks looking for a place with minimum work among people with similar situations and interests. While there is a legal definition it does not look to a zero tolerance approach to maintaining this status. Many such parks permit a small number of slightly younger people to reside in them, but there is a fixed percentage that they cannot violate to maintain the designation. So if you are pushing the advertised age and are interested, it doesn't hurt to check with the park management. 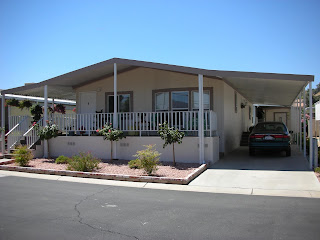 Family parks don't have the age restrictions. That does not mean older folks are not welcome, just that there will be people of all ages. There are people that may like that. Some of the nicer parks of both kinds have amenities like swimming pools and playgrounds for the younger set. Either type of park can be an excellent choice for snow birds looking for a part year residence at a minimum cost compared to a single family house. Add to that the advantage of the outside chores and some utilities are included in the monthly lot rental fee. Beyond all that you have the benefit of people keeping an eye on your property when you return to the frozen north for the summer. Like I said, many parks have a well developed sense of community. There often are activities like Saturday morning pancake breakfasts in the club house as well as other social gatherings. You can even rent a home in some of the parks. Most of the time homes are owned by their occupants even if it is only partial year. In some cases the parks are resident owned in that they buy shares in the park which can be sold when they leave. These parks often have significantly lower monthly fees. I have a friend who paid $20,000 for his share of the park some years back and now people are paying around $30,000 for their shares – so it can be a good investment that makes money while keeping expenses lower. The point of all this is that each park is different and for those looking into such a home it would be a good idea to check with the management of several parks to see which one best fits their needs and lifestyle. I have looked at one park that was really nice and had a montly lot rental to go along with it AND a half inch thick book of rules for residents. As with condos, check it out before you make the commitment so you don't end up like one buyer with many biker friends who found out that motorcycles were not permitted in the development only after moving in. Here in Pinellas County you can hardly go more than a few blocks without passing a mobile home community, so you don't have to settle for one that doesn't meet your needs. Some are concerned about the structural integrity of mobile homes located in hurricane alley. There are two things to keep in mind when looking at this question. First is that there are many homes occupied that were build in the mid sixties and they are still provided comfortable shelter for many people at very reasonable prices. For example I recently purchased a home and had to replace just two screen panels in the screened in porch that had been damaged by flying debris during last year's brush with one such storm. The home made it through just fine. That said, if a cat 4 or 5 storm is coming, it would behoove everyone to get out of the way no matter what you live in. The second point it that as of July 16, 1976 new HUD rules went into effect and now these homes are manufactured homes, even if there are wheels underneath. The change was greater than merely nomenclature. There were new contruction standards where some of the material specifications actually exceed those of traditional stick built houses, including fire prevention and resistance. If you are interested, a brief history of mobile homes can be found at https://mobilehomeliving.org/the-history-of-mobile-homes/. Like I said at the beginning most a far cry from Carville's disparaging description. However with such a great selection of parks and units it may take a little research to find just the right one. For the investor, they often feature a lower financial threshhold and some of the traditional chores of rental ownership are handled by the park. You just have to find a good one that does the job well and keeps the residents happy.
Posted by Choice Properties at 7:26 PM