Keeping in Touch for Free

With the recent need to set aside the benefits of face to face meetings many of us have taken to working from our homes, Along with the obvious advantages of bypassing the commute to the office and having the refrigerator only a few steps away, there are some downsides to this new found immobility. 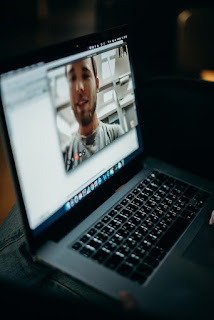 For many in the real estate investor community the dealing with remote associates is nothing new. Unless the investor is one of the big guys, he (or she) probably doesn't have a regular office and on site team to work with. Many of us get by with a cell phone and email. We sign contracts online. We do preliminary research online... including reviewing pictures and videos, when available, online. We have learned to function pretty well with this arrangement.

However we still had the gift of mobility to back up our electronic connections. I would meet with buyers, sellers and contractors at one of my many remote offices around town. My empire is so large, I probably have at least one in your town. You can recognize these offices by the big sign out front that says Dunkin' Donuts, or now some of the new ones just say Dunkin'.

I hope to get back to that practice as soon as possible because studies have shown that 55% of communicating happens through facial expression and body language and another 38% through tone of voice and only 7% through the actual words. (Dr Mehrabien at UCLA.) We can pick up the tone of voice through the phone, but even that is totally missing from email communication. One trick that former FBI hostage negotiator Chris Voss suggests to help prevent miscommunication is to read your email aloud in the most hostile tone of voice to see how it sounds... and then fix it before hitting Send.

Years ago I was working for an energy company in Virginia. I couldn't say how many states they had facilities, but communication was an expensive issue. People would travel to a nuclear plant in Connecticut or a coal-fired plant in West Virginia – or perhaps workers from the various plants would come to the home office. They would lose a day or two traveling for a meeting that lasted an hour or two or three.

Then along came video conferencing. We could have a team of people in Richmond meet with a team from Connecticut. The meeting would run for an hour and then we could get back to our regular tasks. The process that saved a multi-billion dollar company hundreds of thousands of dollars a year was generally out of reach for small business people.

Along came programs like Skype, Webex and Zoom among others and this capability is as close as your laptop or cell phone. And much of it is available at no charge. As I look over the connections I have available just now at my desk, figuring what would work best for me I see I already have a couple of the programs already and I'm pretty sure you do to.

The first one I found is part of the ubiquitous Google suite called Hangouts. You can do one on one conversations up to ten participants... twenty-five if you spring for another package. Being so readily available has its drawbacks as well. There are a number of young ladies... make that women... on LinkedIn who seem to think it is a dating app and are looking for sugar daddies among the businessmen who frequent the site. They tend to want to start on Hangouts. I've had one act offended when I told her I wasn't interested, but happy hunting.

In any case Hangout is available and ready to go. It ties into your Gmail contact list and is one more way Google insinuates itself into our lives. You can make calls and send texts from it as well. Google also makes an Android app called Duo and you can get about ten people on the line with that one as well, but it does not do SMS texts. It does have end to end encryption if you don't want anyone else to know what you are up to.

Another choice I found was WhatsApp. It's less common than Google as you have to look it up and download it, but it also ties in to you Gmail contact list – with your permission and lists those who already have the app, which is kind of a nice thing. I got it when my grandson was traveling through Germany as it works well internationally. It's a nice program, not quite as common as Hangouts, but is well worth checking out.

Then I checked out my Skype program which I used several years ago with great success. It was easy to use and the picture quality was acceptable. You can get a free trial, which is a tip-off to what I found when I logged in to my account. Micro$oft has made this a paid service. It's not expensive unless you are on the phone all day. It does have the advantage of allowing you to get a local number even in another country if you so desire. I don't know if Google Voice does that.

This week I had the privilege of taking part in a meeting with about a dozen others using a program from Jitsi.org. It seemed to work very nicely with inputs from spreadsheets and an overhead projector. It is free for occasional use and inexpensive for use of regular teams that need to stay in communication. If you have a group that needs to meet periodically, it's worth looking at.

There are others, Cisco Webex that I have not used and Zoom which is more of an enterprise solution. The point is that you can keep in touch and see who you are talking to and what they are talking about without driving all over town or across the state or country. This time that we are locked up, or I guess I should say locked down may just teach us to use some tools to make us more efficient, which is not a bad thing. This stuff will help, but no matter what Dr Fauci would like us to do, there is no substitute for getting together with real people.

Posted by Choice Properties at 3:23 PM