Memorial Day – It's not about the cookouts

This weekend we commemorate Memorial Day. It's usually a time for getting together with family and friends for a cookout or a day at the beach. However the day is much more than that. It began as Decoration Day when communities remembered those who died in the War Between the States, As time went on and our country became involved in more actions against evil leaders wishing to impose their will upon the world, the day became a day of remembrance of all that were lost in keeping us free, and the name was changed to Memorial Day. 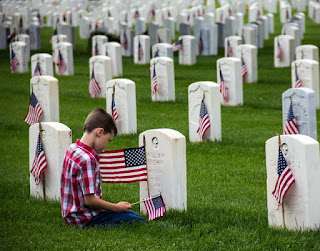 This year as many of us have had freedoms limited, may we remember what we had – and pledge to ourselves and our families that they shall be restored, it would be good for us to remember those who lost their lives standing against the enemies of freedom. To this end, I am recognizing the things said by some of the leaders who fought against the greatest evil of their time – and conquered it, but at such a great price. They were the leaders of the greatest generation – my father's generation.

Dwight D. Eisenhower reminded us that “There is no victory at bargain basement prices”. He was the allied commander that pulled together armies from many nations that stopped and destroyed the Nazi empire, threatening to enslave the world. After that, he led our nation to a time of great peace and prosperity.

However he had several warnings for us. He said, “History does not long entrust the care of freedom to the weak or the timid”. We can not let our enjoyable comfort blind us to the need to be watchful and prepared. In fact he was concerned that our desire for peace and safety take us away from the vibrant nature we achieved under his watch. “We will bankrupt ourselves in the vain search for absolute security”, reminds us that spending money is no substitute for involvement in the world and doing the right thing.

He also had some words that we can apply today: “There is nothing wrong with America that faith, love of freedom, intelligence, and energy of her citizens cannot cure.”

One of the generals Eisenhower counted on to get the job done was George S. Patton. He had this view of bravery. “If we take the generally accepted definition of bravery as a quality which knows no fear, I have never seen a brave man. All men are frightened. The more intelligent they are, the more they are frightened.” He understood it was normal to be afraid when facing dangers, but said this. “Courage is fear holding on a minute longer.

Then there was the man who held the British Empire together during its darkest days, Winston Churchill. He had an appreciation for the sacrifices of those who held off Nazi attacks during the Battle of Britain when he said, “Never in the field of human conflict was so much owed by so many to so few.”

Churchill found that life is not as complicated as some would make it in an effort to back away from realities as he said, “All the great things are simple, and many can be expressed in a single word: freedom, justice, honor, duty, mercy, hope.” Words that have, unfortunately, found little use in everyday conversations lately.

Then his words for today: “Courage is rightly esteemed the first of human qualities... because it is the quality which guarantees all others.”

The World War II generation was not the last to sacrifice for freedom. There have been many others right down until today who left home and loved ones to stand in the gap for us against those who would do us harm. We need to take some time to remember them as well.

While this day is meant to retain their memory, let's not forget the veterans who came home and are in need of our support.

Posted by Choice Properties at 9:37 AM